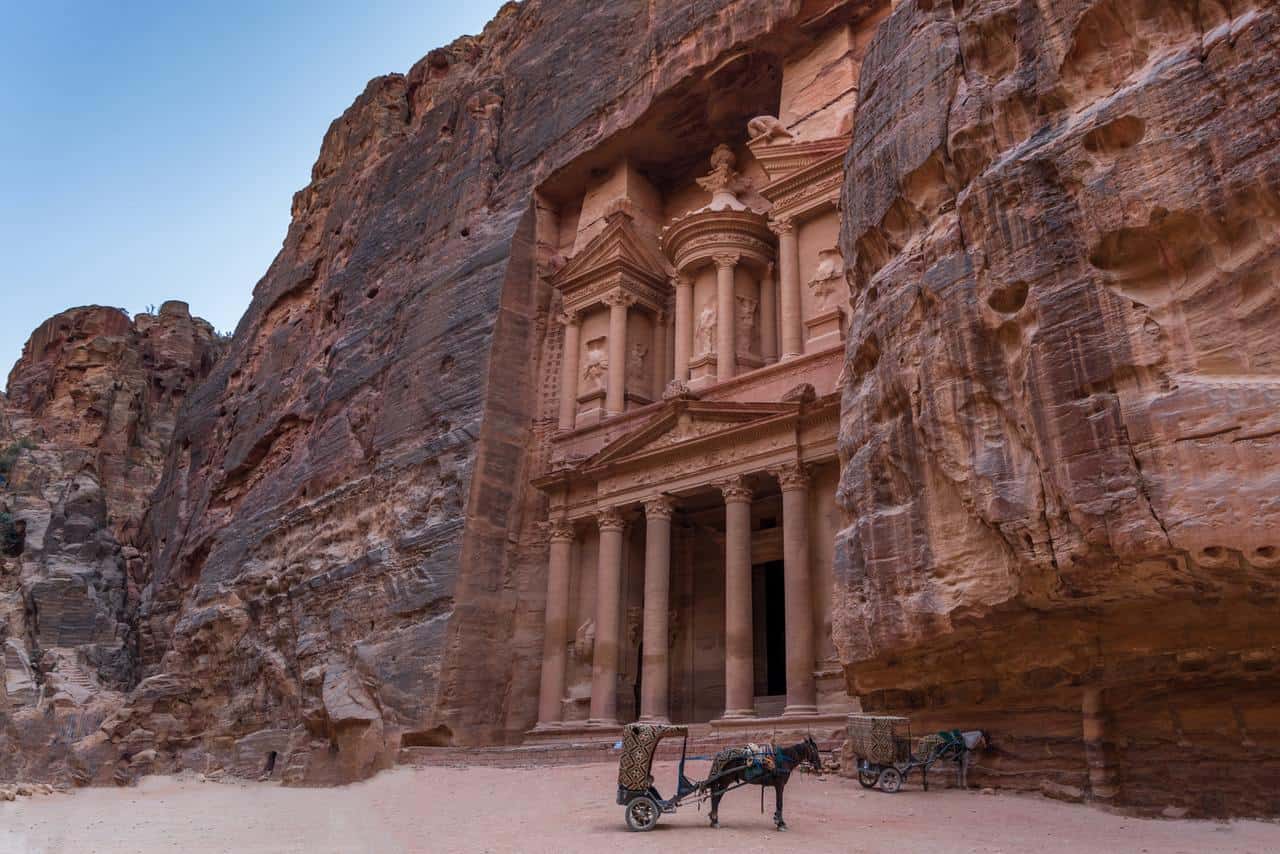 The world is a big place, and it is not easy to narrow down all the places you should see in your lifetime. With so many incredible places, perhaps even the most seasoned travelers could never hope to see them all. So we compiled this list of the top 10 travel bucket list destinations not to miss. 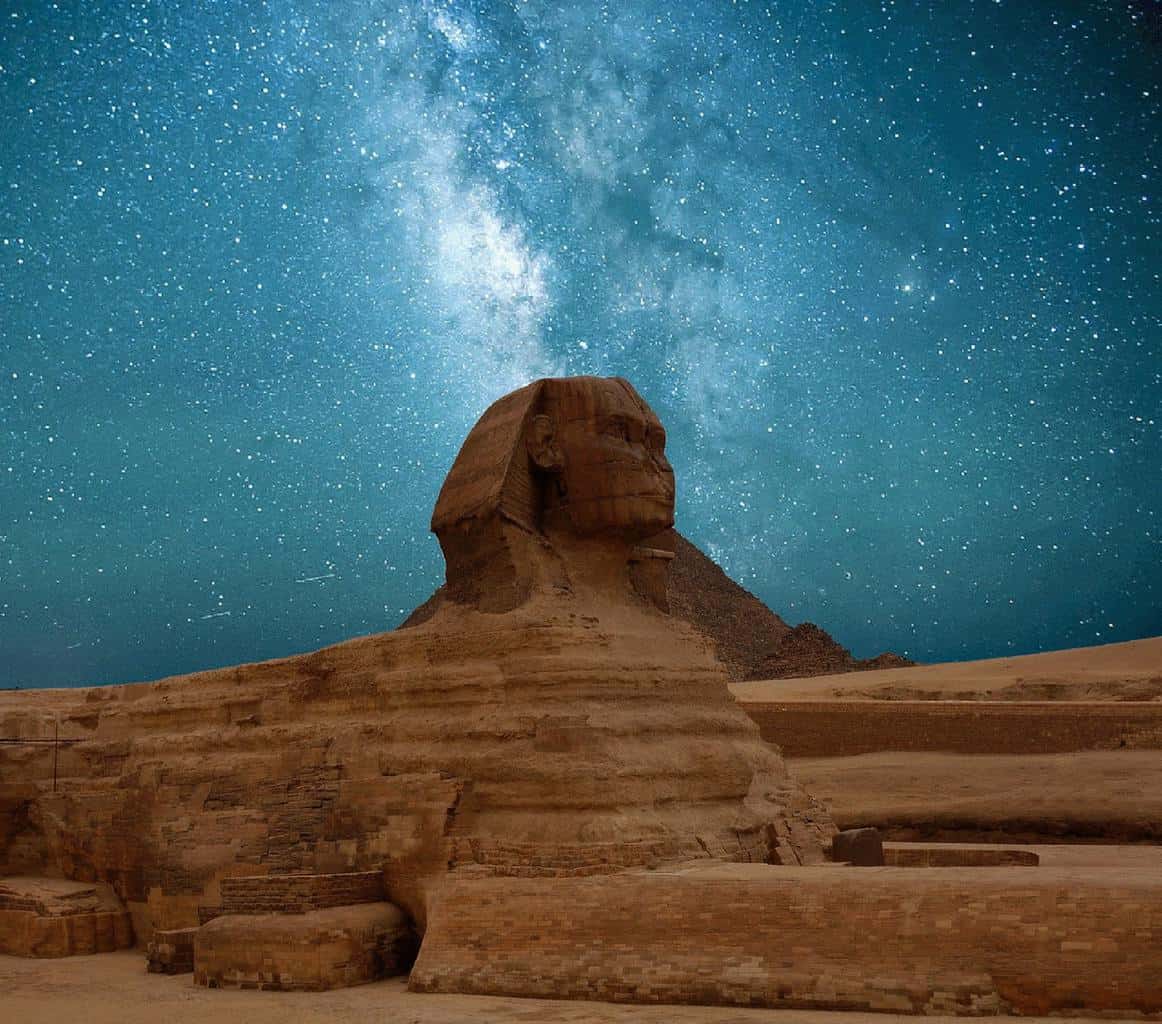 My most inspirational Mark Twain quote is:

“Travel is fatal to prejudice, bigotry, and narrow-mindedness, and many of our people need it sorely on these accounts. Broad, wholesome, charitable views of men and things cannot be acquired by vegetating in one little corner of the earth all one’s lifetime.”

One of the reasons I love to travel is the opportunity to experience in person some of the most amazing sights in the world.  But there truly is only so much time (and money) to visit all these places.

Why not start with these top 10 travel bucket list destinations?

1. The Pyramids of Giza

The pyramids at Giza have stood for thousands of years as one of the seven wonders of the ancient world. These pyramids truly need no introduction as one of the top travel bucket list destinations. Built around 2560 BC, this makes them older than both Stonehenge and Great Britain itself!

Made out of over 2,300,000 stone blocks, each weighs on average two tons. These structures must have been constructed with some pretty advanced tools back when they were built. Just take in these huge structures set against the desert landscape – amazing!

It is best to visit during the summer months when you can be sure of dry weather, which makes exploring much easier.

Still, if you really want to see them at their “greatest,” visit early in the morning before too many tourists arrive or late afternoon just as things get busy.

If possible, try to avoid weekends where crowds are guaranteed to make seeing all three pyramids difficult.

Petra is a vast city carved out of mountains in the south of Jordan; it was founded as far back as 312 BC and became an important part of the trade route between Arabia to Europe. All buildings were originally cut into 300m cliffs creating over 8km worth of passages & chambers, which means that you can spend days uncovering all there is to see here!

This place has been voted one the best destinations for travelers seeking adventure due to its remote location among breathtaking landscapes, don’t miss this opportunity – you will not be disappointed!

If possible, visit during the winter months when temperatures are cooler and the crowds much fewer. Summer heat makes exploring harder so take plenty of water with you.

If time permits, try to visit early morning or late afternoon before too many tourists arrive. 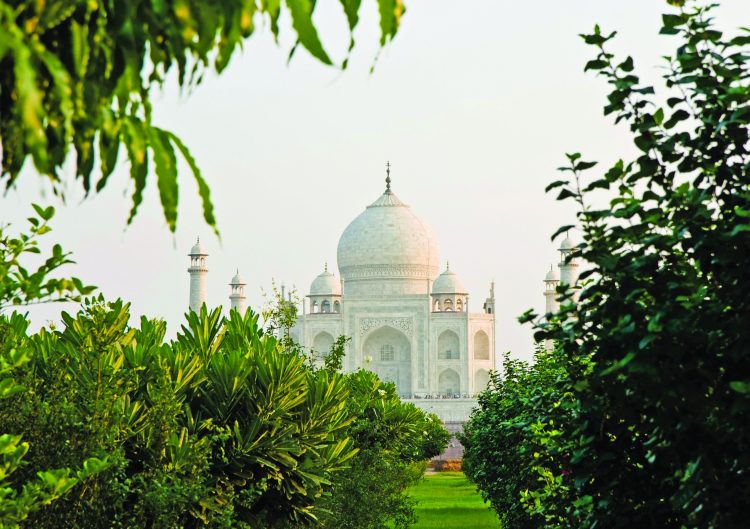 The Taj Mahal is a magnificent piece of architecture and one that you will never forget after visiting. It was built in the mid-1600s by an Emperor for his wife who had died during childbirth. It stands out among green gardens with its four slender minarets (towers), which can be seen from miles away – truly spectacular!

Its location right beside the Yamuna River makes it particularly beautiful when combined with lush surroundings. As one of my travel bucket list destinations, this place really is hard to match, so try to make time to visit if possible.

If not, visit early morning or late evening just before closing time as these are times where crowds thin slightly, making exploring easier too.

Avoid weekends at all costs, though, especially in high season when hordes of tourists descend on this place! 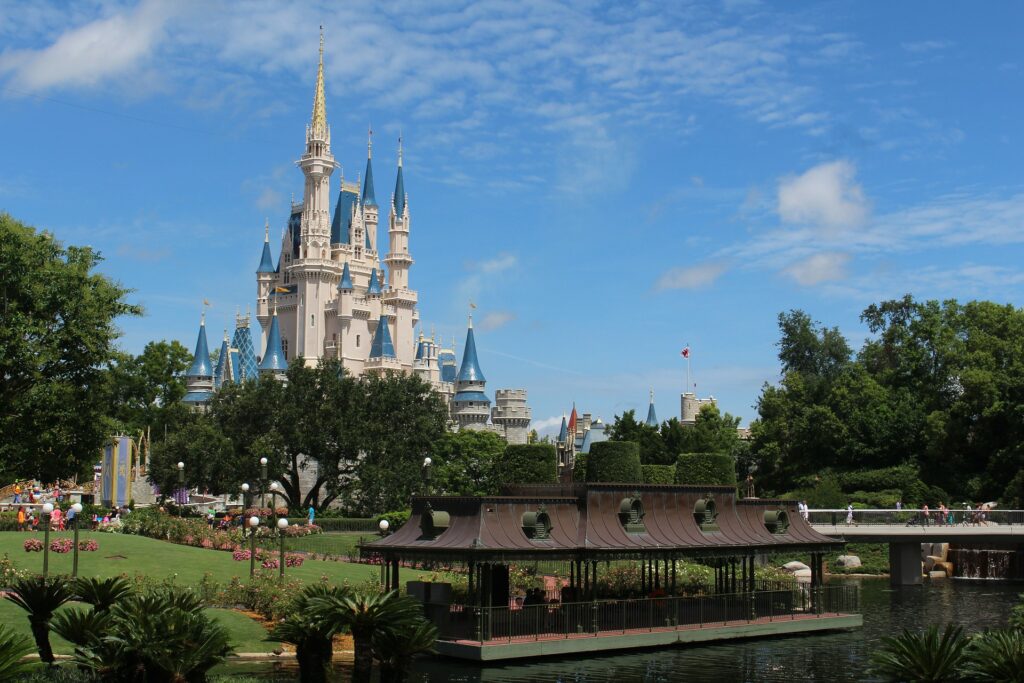 In looking ahead, one of the best places to travel in 2021 (and beyond) is Orlando and Walt Disney World. Photo: Pixabay

Who doesn’t love Disney World? And you know that my multigenerational family Disney, which is why (for us) it landed in the top travel bucket list destinations. While it may not be historic like many destinations on this list, it truly is memorable for all families.

We all grew up watching our favorite cartoons come to life in front of us, and now you can experience the same magic! You can also let others know you’re going to Disney World and make it a group outing to enjoy together!

Walt Disney World is home to so many amazing attractions that it would be impossible to list them all. If you had to choose one, then it would probably be Splash Mountain.

As your boat climbs higher into the mountains, you get a spectacular view over Florida before descending down through rivers & waterfalls, making this ride just perfect for anyone who loves adventure! There are plenty more incredible rides here, too, though. Don’t worry about not having enough things to do as there really is no better theme park than this one.

Notre Dame de Paris is a 12th-century Gothic cathedral, and it’s one of the most famous examples of French architecture in history.

It was started in 1163 by Maurice De Sully, who was Bishop of Paris at the time. And when people talk about this place, they usually say, “it has no equals.” However, this landmark dates back over 800 years ago, so you can imagine how many things have happened here throughout that time span!

You’ll see several different architectural styles mixed into this beautiful cathedral, making it even more amazing to look at. Given its popularity among both locals and tourists alike, Notre Dame de Paris is definitely something everyone should visit while visiting France! 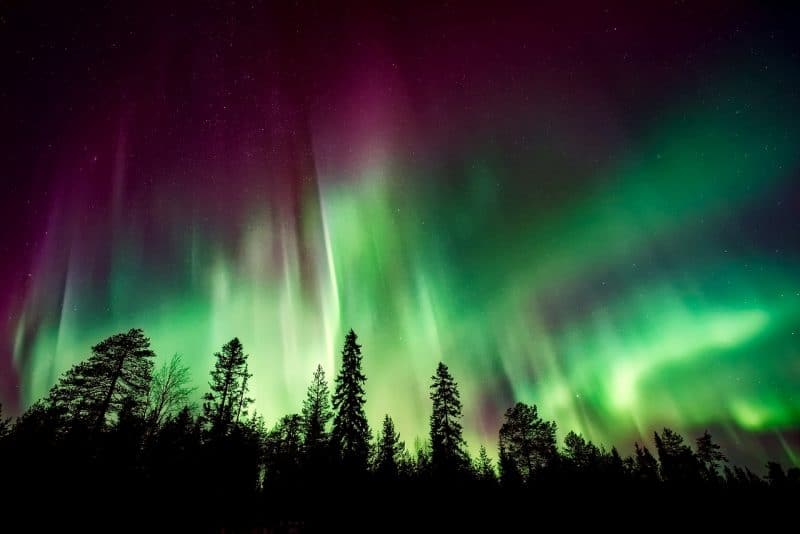 Ready to experience a once-in-a-lifetime show from Mother Nature? The Northern Lights: Everything You Need To Know Image via Pixabay

The Northern lights are a natural phenomenon that appears as flowing green, blue, or purple light waves. As the solar wind enters Earth’s magnetic field, it interacts with gas particles in our atmosphere, causing them to glow and emit different colors of light. This results in spectacular displays, also known as auroras.

Although they can be seen all year round at northern latitudes, you have an increased chance of seeing them during the autumn months when the nights are longer due to fewer daylight hours.

The best place on Earth for witnessing this phenomenon is Iceland, where 98% percent of visitors go specifically to chase these magical shows of swirling color across the night sky!

If you want stunning pictures, then head up north between September and March, but remember it gets very cold, so come prepared with lots of warm layers!

This is one of the most breathtaking natural wonders in Africa, and it has to be seen to believe! Located on the Zambezi River at the border between Zambia and Zimbabwe, Victoria Falls is the world’s largest sheet of falling water. These falls drop a total of 354 ft (108m) with an average flow rate reaching up to 17,000 cubic meters per second during peak times before then dropping down as low as just 450 cubic meters per second!

There are different vantage points for seeing this colossal display from above. You have your choice between being completely dwarfed by its size. Or choose to look out across a long stretch towards both countries’ sides by viewing areas called Livingstone Island. This is where David Livingstone was first inspired to use his life’s work to help abolish the slave trade. 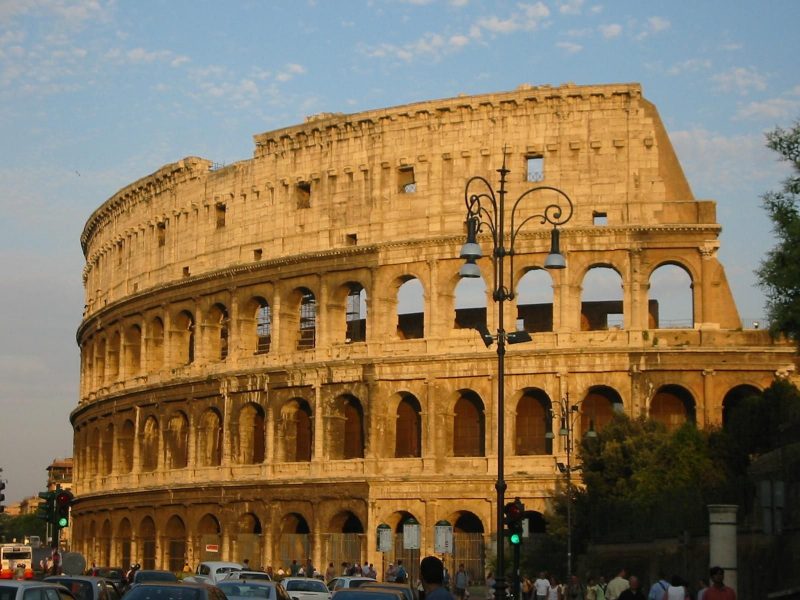 The Colosseum is the most well-known and one of the biggest amphitheaters built in Ancient Rome. Between 50,000 and 80,000 spectators gathered to watch gladiator fights as well as other public events such as animal hunts or executions.

With its origin traced back to 72 AD under Emperor Vespasian’s rule, it took only eight years to complete and remained standing for over a millennium (through earthquakes).

Today, this architectural masterpiece has become an iconic symbol of Roman history and Italian culture.

What makes the Colosseum especially interesting, though, are those stories behind all those tunnels we can now see underground. This may make you feel like a Roman gladiator yourself.

It is a flat-topped mountain forming a prominent landmark overlooking the city of Cape Town in South Africa. It was declared one of UNESCO’s World Heritage Sites in 2006. Visitors enjoy incredible views from this vantage point. Chose to either climb up to the very top or ride a cable car ride halfway through for an easier journey.

The Mountain has several faces that are easily relatable with different features in nature. Lion’s Head being its lion face, Devil’s Peak resembling a sleeping baboon, and Table Bay mimicking water flowing into rocks. While Chapman’s Peak resembles sea waves hitting against cliffs.

The best way to experience all these wonders at once, though, is during sunset when Table Mountain turns into glowing gold! 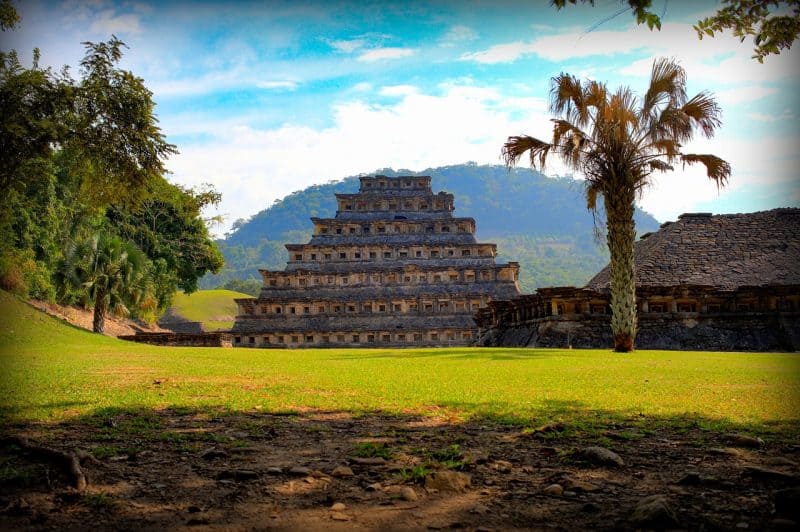 Reasons why you should visit Mexico include their awe-inspiring pyramids. Image via Pixabay

The pyramids of Mesoamerica may be lesser known than those in Egypt. Yet these ancient monumental structures are land in the top travel bucket list destinations in the world.

The most famous ones are the Pyramids of Giza and Chichén Itzá. These were built between 2600 BC and 900 AD by Maya, Aztec and Toltec civilizations, respectively. These constructions represent a significant part of their history as well as a culture. If you ever happen to visit Mexico City, near Cancun or Palenque, don’t miss out on exploring them!

You can climb up all the way to reach its top, where you will find beautifully decorated relics inside that used to belong to rulers long ago. Alternatively, you can simply admire them from afar to experience the imposing silhouettes they cast, especially at night when their lights shining through the darkness are unforgettable.

The world is your oyster and there are so many travel bucket destinations that you should not miss. While it may take you years to see all these magnificent things, witnessing even half of the magnificent views mentioned above will already be a story worth telling!