If you’re like me, you and your family may not need an excuse to pack your bags for that magical place called Disney. But just in case, you’re wavering on the border of saying nay or yeah to a family vacation to Disney, ta-dah! From popular characters and annual events to new “lands,” we’ve got 7 reasons to visit Walt Disney World in 2018.

It truly is magical the pull Walt Disney World vacation has on families. If you’re on the fence and not sure if this summer is the right time to visit Disney, then get all comfortable. Because we think THIS summer IS the perfect time to take the family and/or multigenerational family to Disney.  Why?  We’ve got 8 reasons to visit Walt Disney World in 2018.

The price is right!  Yeah, you heard that!  Take a look my recent article listing the summer travel deals at Disney this year. Big savings on rooms. Free dining package for kids. And all new attractions (including the opening of Toy Story Land. Summer is heating up at Walt Disney World, and these travel deals at Disney are HOT! And great resorts and hotels to stay at Walt Disney World — and save money.

Sure I mentioned this new attraction above, but the opening of Toy Story Land at Walt Disney World’s Hollywood Studios on June 30, 2018, is reason enough to plan a visit to Disney this summer!

My family and I were lucky enough to get a preview during my sponsored Disney Social Media Moms visit in February.  And my 2 year-old-granddaughter though the supersize blocks were pretty cool. And she definitely wanted the supply of Babybel (individual small snack cheeses) — just out of her reach, which she got later.

“Toy Story Land represents Walt Disney Imagineering’s collaboration with our storytelling partners at Pixar,” said Bob Chapek, chairman of Walt Disney Parks and Resorts. “This new land will invite everyone to experience the joy of being a toy.”

Go ahead and read this post Why You Should Visit Toy Story Land This Summer for details. But let’s just say from swirling saucers to roller coasters to supersized toys, Toy Story Land will be fun for the whole family, from infinity and beyond. 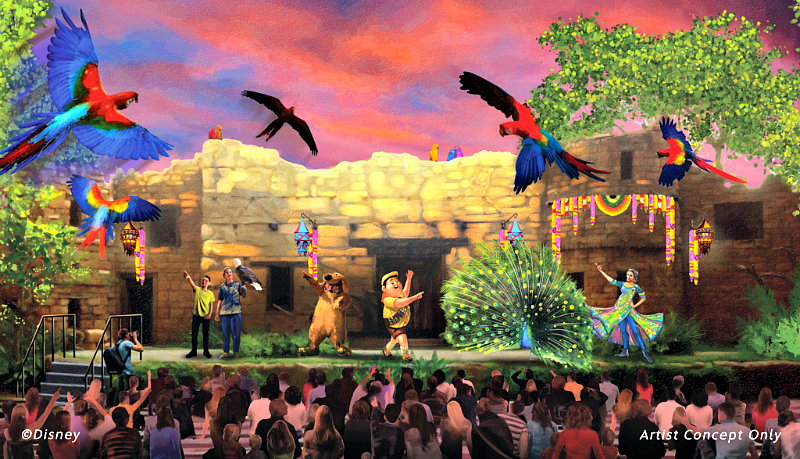 Congratulations to the Animal Kingdom for gifting family vacations with all those amazing experiences for 20 years! My family has always been big fans of Animal Kingdom, from its safari to the Festival of the Lion King live show.

Commemorating the milestone 20th anniversary, the 500-acre adventure park will offer animal
encounters, conservation talks by animal-care experts, backstage experiences with experts at Rafiki’s Planet Watch, other family-friendly activities, specialty desserts and more during an expanded Party for the Planet celebration April 22-May 5, 2018.

After experiencing the new land of Pandora – The World of Avatar during the Disney Social Media Moms Conference, I’m an even bigger fan.  My new favorite ride is Avatar Flight of Passage — replacing Soar at Epcot.  (You’ve got to experience this! But be sure to FastPass your visit because the lines are extremely long!)

Starting April 22, a new show lands in the Animal Kingdom, starring senior wilderness explorer Russell and his canine pal Dug from the Disney Pixar film “Up.” “Up! A Great Bird Adventure,”will teach guests about birds from around the world, complete with animal encounters.

For another celebration, Donald Duck will take over DinoLand U.S.A

I love pretty things and especially pretty outdoor things. Seriously, the coolest event in the park is celebrating its 25th anniversary, the Epcot International Flower & Garden Festival. The 90-day festival is in-progress and runs through May 28. The Disney character topiaries are seriously crazy cool.

Other happenings are 15 Outdoor Kitchens, garden tours, Garden Rocks Concert series, new kids’ activities, and more. And the cool part — it’s just there for you to check out, right in the park and at the Disney resorts.

But that’s not all!

“Each year, guests have questions related to edible gardens,” said Eric Darden, horticulture manager for the Epcot International Flower & Garden Festival. “They get a big kick out of comparing items in our gardens with the herbs and produce our chefs incorporate into the festival’s Outdoor Kitchen recipes.”

Every Friday through Monday during the festival, the Garden Rocks Concert Series will take visitors on a musical journey through five decades of hit tunes. Musical acts at Epcot’s outdoor America Gardens Theatre will include Smash Mouth, Rock Springfield, Village People and The Spinners.

5. More to Love at Disney Springs 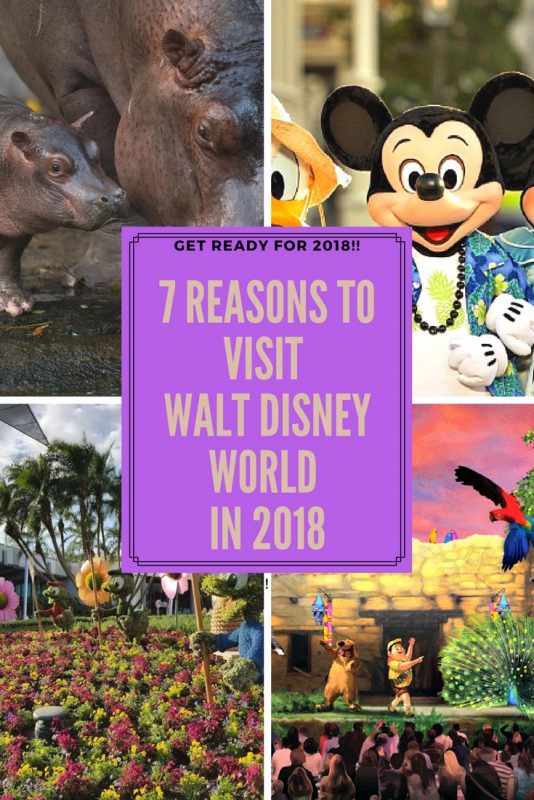 Sure there’s a lot of family fun and exciting changes IN the 47 square miles of its magical Walt Disney World theme parks, but I always include a stop at Disney Springs (and here’s why!).

In 2018, Disney Springs will also bring new cha-changes!  These amazing changes include:

Next time I visit Disney Springs, this Grammie is going to take time out from the grandkids to check out STK Orlando  — to see how it compares to the amazing dining experience I had at STK Denver.

In Tomorrowland at Magic Kingdom, Mr. Incredible, Elastigirl, and Frozone from Disney Pixar film “The Incredibles” (and upcoming “Incredibles 2”) will celebrate with a “super” dance party on the Rocket Tower Stage. And, for the first time ever, guests will get to meet character Edna Mode, the greatest superhero costume designer of all time.

Not going to lie — wine, food, AND festival!?! This lands at the top of my food, wine, and travel bucket list. The always popular and unforgettable Epcot International Food & Wine Festival returns to keep Disney’s summer love moving into another unforgettable fall. Guest favorites also return in 2018. Global marketplaces. The Eat to the Beat Concert Series. Guest chef appearances. Culinary demonstrations. Beverage seminars and so much more.  This is a perfect romantic couples vacation (hint: hubby) or a girlfriend getaway (BFFs, are you in?). I’m bummed I haven’t attended this renowned food and wine festival — yet (but some of my BFFs at TravelingMom have).  AND it’s at Walt Disney World!

So what are you waiting for?  What’s is one of your reasons to visit Walt Disney World in 2018?  Come on don’t be shy, tell me in the comments below.

Sand, Sloths and Skyscrapers: Travel Deal at The Westin Playa Bonita, Panama 5 Tips for Planning a Trip to NYC