I grew up with Winnie the Pooh books and cartoons. Also as a writer, the creative process of other writers always fascinated me — and their relationships with their family and the outside world. When the opportunity to attend a screening and write a movie review of about the life of the Winnie the Pooh author, how could I resist? Read on for my movie review for Goodbye Christopher Robin.

Last week, along with my teen granddaughter and her friend, we previewed a screening for the upcoming Goodbye Christopher Robin. This movie peeks inside the successful creator and writer of the Winnie the Pooh children’s books and his relationship with his family, in particular, his son Christopher Robin. More than a story about the writer and his award-winning books, this was about his struggles with PTSD, the relationship with his son, and repercussions of fame on the family.

I watched the trailer but hadn’t anticipated the darkness of the underlying themes. Let’s start with the synopsis (courtesy of Fox Searchlight Pictures):

Goodbye Christopher Robin gives a rare glimpse into the relationship between beloved children’s author A. A. Milne (Domhnall Gleeson) and his son Christopher Robin (Will Tilston), whose toys inspired the magical world of Winnie-the-Pooh. Along with his mother Daphne (Margot Robbie), and his nanny Olive (Kelly Macdonald), Christopher Robin and his family are swept up in the international success of the books; the enchanting tales bringing hope and comfort to England after the First World War. But with the eyes of the world on Christopher Robin, what will the cost be to the family?

Fairly quickly, the film set the stage for the turbulent times of World War I with scenes experienced by the famous playwright (while a soldier) A. A. Milne. He returned home from the First World War to attempt to pick up his life as it once was. However, post-war flashbacks (PTSD) became too much for him. He and his wife packed their bags and left the socialite scene of London with their son and nanny for the countryside.

Already the Milnes were wealthy and famous, so moving to the quiet countryside was difficult for Mrs. Wilnes. So difficult that she returned to London, in essence abandoning her husband and son, followed almost immediately by the nanny taking a leave due to her mother’s health.

The core of the film (I felt as did my teen guests) was when father and son were left alone together. Sadly, due to the father’s frequent absences, neither one knew each other.  What followed was magical and awkward. Walks in the countryside with the son dragging his Teddy Bear (Hint: Winnie the Pooh), getting to know each other for the first time.

To me, this is the heart of the story…when father and son enjoy each other and explore each other’s imaginations. This is also what inspired Milne to create Winnie-the-Pooh. And this is also the time that his son helps him recover from the debilitating flashbacks from the war (PTSD).

And this also sets the stage for what I feel is the ultimate betrayal.

The father (and writer) takes these special moments with his son and literally writes the Winnie-the-Pooh series. This is no longer an intimate magical father-son moment; it becomes an epic children’s literature moment, a literary award-winning children’s book. The world was introduced to their private special moments and imaginary world. It was no longer just a father-son moment, breaking the parental trust.

I’ve been a travel writer and blogger now for more than two decades. My now adult children experienced the beginnings of my journey, while my grandchildren reap the benefits of press trips (including Walt Disney World).

But it’s not all fun, games, and vacations in the travel writer’s world.  I’m on assignment, and my grandchildren often have to sit through boring meetings. (Rewarded with ski trips, breakfast with Disney characters, and amazing luxury hotel family experiences.) We are most certainly blessed, but there is a price to pay, whether you are famous or not.

Once the lights came up on the Goodbye Christopher Robin movie, I thought about the price to “fame.” (And side note, but no means am I famous, whatsoever!) My family understands that this is my job. A big part of my career is writing about experiencing multigenerational family travel

My granddaughter reminded me of our Walt Disney World visit a couple of years ago with her brother and Grandpa. She said, “Remember when you promised one evening of just us experiencing Disney on our own? No pictures. No social media. No nothing.”

I actually did remember, and I did keep my promise.

My granddaughter said, “That was my favorite night, Grammie.”

But you know what?  That was also my favorite night, and that moment caused me to step back and be IN the moment especially when I’m with my grandkids. I took pictures like a non-blogger-travel-writer-social-media-influencer Grammie would do. And I didn’t share them on any social media channels.  (Although I did text them to my daughter (their mom), and Papa who took a night off after taking care of the grandkids while I was in meetings.)

And now I have a deal with my grandkids and family. We take the photos I need for my magazine, newspaper or online article. Then their Grammie travel writer and blogger relaxes and enjoys the moments. 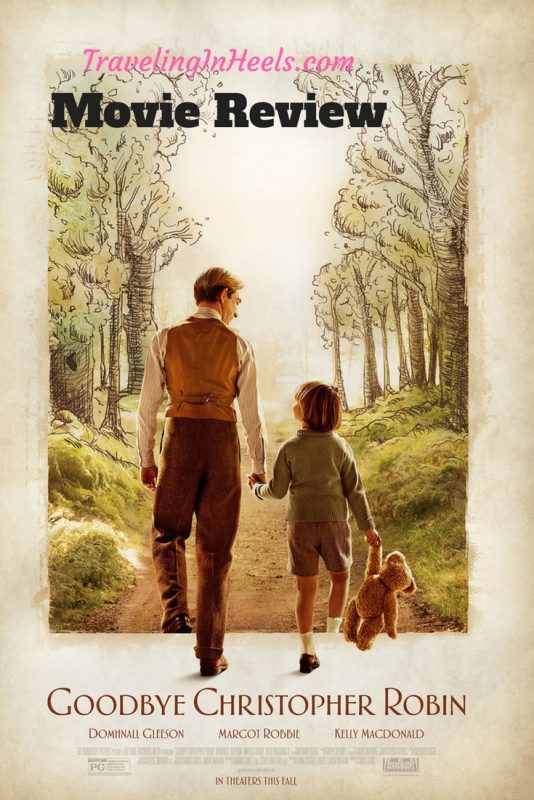 And here is the Offical Trailer for Goodbye Christopher Robin, in theater November 10, 2017.

Although this is rated PG, I felt that some scenes were a bit graphic (war) and intense (dark topics) for my 13-year-old granddaughter, who is actually quite mature for her age.

Disclaimer:  I was provided movie passes for the purposes of a review. Opinions expressed are my own.

And for fun, sit back and watch Winnie the Pooh in action.

Top Things to do in Florida Outside of Disney World It’s Complicated…Family Holiday Traditions: Home or Travel?

5 Tips for a Happy and Healthy New Year

Trends in Western Wear for Women Over 50

This message is only visible to admins.

Error: Error validating access token: The session has been invalidated because the user changed their password or Facebook has changed the session for security reasons.
Type: OAuthException
Solution: See here for how to solve this error

Visiting LA? Our guest author offers the ultimate guide to the best places to eat in Los Angeles, California? Yummy! Did she miss any? Share with us your suggestions! travelinginheels.com/ultimate-guide-to-the-best-places-to-eat-in-los-angeles/ ...

When traveling to Los Angeles, don't miss the food with our guest writer's ultimate guide on the best places to eat in Los Angeles, California.
View on Facebook
·Share

Driving Up Pikes Peak Colorado - What To Do On America's Mountain