When it comes to city breaks, a few “classic” cities always crop up. Are they overhyped? Or could these destinations really offer the best city break experience that you could hope for? Read on for our top 4 classic European city breaks.

The term “city break” has come to mean a short break, usually over the course of two or three days. A city break is not designed to give you time to soak in everything a city has to offer. It’s more like a short highlights package, which you can enjoy as a break from the norm for a short while. Sometimes we just need a break. We might not have the time to take a full holiday, and instead, make the choice for a city break. Get ready for your next vacation with these 4 best European city breaks.

There’s so much to see and do in Paris, can you really enjoy a weekend in the city? The answer is a resounding “yes”, but you’re going to have to limit yourself in terms of what you want to see.

For the best experience, try and theme your city break; for example, you could have an art-focused city break, a shopping-focused break, and so on and so forth. By crunching down all Paris has to offer into a single category, you can have a wonderful time without feeling like you’re missing out on too much.

As the capital city of the UK, London has got plenty to offer a tourist who loves city breaks. There are grand hotels to be enjoyed, historical sites to visit, and the shopping on the famous Oxford Street is some of the best in the world.

Like most cities, London is inescapably busy — you’re going to want at least three days here ideally, just so you can leave time for getting around. Wherever possible, use the Underground or public transport; both are much faster than joining more cars on the already-gridlocked roads.

Prague is something of an up-and-comer in the city break status, but it’s easy to see why millions of people per year elect to grab cheap flights to Prague to experience the city for themselves.

Not only is the city incredibly affordable — far more so than any other on this list — but it’s rather unique in its eastern European charms. Discover plenty to see and do, but make special time for visiting the Prague Castle. It dates from the 9th century and is a sight to behold.

Various Italian cities are popular destinations for a city break, but none quite so wonderful as Rome. This ancient city plays host to millions of modern tourists a year, all drawn by its old-world mystery and delights.

However, unlike the aforementioned, Rome is not a great destination for a short jaunt. To do the city right, you need to give it time. There’s simply too much to cover, but you can’t trim it down into chunks the way you can with Paris. The city’s intrigue is overwhelming in its history and architecture, meaning that if you try to limit yourself, you’re going to miss out on too much.

Paris, London, and Prague make for great city break destinations, but if you had to choose one of these classic European city breaks, Rome is perhaps best left for when you have more time to explore.

What is your favorite classic city escape? Share with us in the comments below. 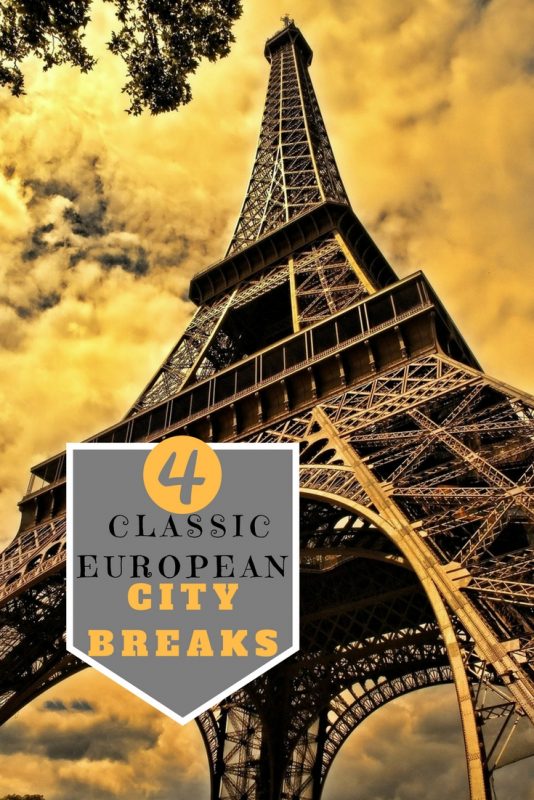 Dosh Double Cash Back at Local Restaurants! 3 Best Weekend Getaways in the U.S.A

Review of Gaylord Rockies Christmas Denver – So. Much. Christmas!