I 💕 💕everything about the Disney experience, from its theme parks and rollercoasters to its food and drink (hello”adult” Dole Whips). And I’m also a fan of luxury hotel stays. But with so many Disney resorts to love, why this one?  I’ll give you 5 magical reasons why you should stay at the Four Seasons Resort Orlando at Walt Disney World.

From your balcony, you can see all four Disney theme parks — and that alone is one of many magical reasons why you should stay at Four Seasons Resort Orlando at Walt Disney World.  Located just 6 miles from the Magic Kingdom, luxury meets the magic of Disney at this family-friendly resort. Combine my Disney-aholic self with a room at the Four Seasons Resort Orlando and this big kid and my multigenerational family are over-the-moon happy.

With its AAA Five Diamond rating, we’re talking pampering from the moment you enter the resort. And that’s just the beginning for my multigenerational family. Read on for all the magical reasons why you should stay at the Four Seasons Resort Orlando at Walt Disney World.

Ready to Save on Tickets? Save $53 on a Disney World 4-Day Park Hopper! Hop through all 4 parks.

My son, daughter-in-law and 3-year-old granddaughter had taken an earlier flight from Denver arriving a couple of hours before me. They had already checked into the Four Seasons Resort Orlando at Walt Disney World, and when I landed, I called them just prior to boarding my shuttle to the resort.  My granddaughter was so excited to show me her “s’prises” (surprises) in the room that she could hardly form a sentence on the phone.

When I arrived, the three waited for me in the lobby, and my granddaughter took my hand to show me the way.  We passed by the beautiful chandelier in the lobby and the check-in desk where kids were invited to play in the waiting area.

The lobby chandelier started the impressive show of luxury, continuing into the massive front desk area, with two oversized reception desks on one side and on the other a concierge desk (Disney Planning Desk). A big-screen TV, game and play area for kids invited them to amuse themselves while the parents checked in (brilliant!).

For this multigenerational family of four, the Four Seasons booked us the Park View Room King, 500 square feet with a king-size bed and a sofa bed.  Granddaughter and I would camp out on the sofa bed while my son and his wife took the king bed.  I admit I wasn’t sure if we’d be cramped, but as soon as I opened the door, I was thrilled and extremely relieved.

But what my granddaughter was most excited about was the “s’prises” on the king bed.  The first magical experience to kickstart her Walt Disney World vacation.

What we all loved was the huge bathroom, closet and suitcase space, and the desk area — and free WiFi. We also were pretty impressed with our view from the balcony of the resort and just how close we were to the theme parks.

Truly, there is so much family fun to be had at the Four Seasons.  Start with “Kids For All Seasons,” their complimentary camp for children ages 4 to 12 — yeah, you read that right FREE! Parents can drop off at their leisure and enjoy time away.  Available daily from 10:00 am to 6:00 pm.

And if that isn’t enough, kids will beg to visit their water park (Explorer Island) with a lazy river, multiple pools (including an adult-only pool as well as family pool), two slides, sand volleyball, basketball and more.  The Hide Out is a separate area for kids 12 and up to hang out with video gaming center, touchscreen tables, and even old-style arcade games.

We only stayed for one night at this resort before continuing on to our Walt Disney World resort hotel, but we couldn’t resist checking out the family pool. After our return from exploring Disney Springs, we took a late-night dip in the family pool, surprised that we were the only ones there  The granddaughter was impressed at the infinity pool that she thought “reached right to the moon.”

This grandma loves her some spa, but unfortunately, with our short stay, I didn’t have time to take advantage of the spa treatments.  But was I ever tempted! Step into 13,000 square feet of relaxation with 18 treatment rooms. Or take the spa experience outside at one of the waterside private bungalows or a couples’ suite. (Enjoyed best while your littles are in the FREE kids’ club, right?)

I also learned later that the spa also offers magical experiences for your little ones, including a princess makeover, or a Mommy (Grammie!) and Me package. And that just might top the best magical reasons why you should stay at Four Seasons Resort Orlando, what is?

4. Dining Experiences for All Ages Including Mickey Mouse

For foodies of all ages, you’ll not go hungry at Four Seasons Orlando. Take your pick from 6 restaurants, ranging from elegant to casual: the rooftop Skyhouse Steakhouse in Orlando; Mediterranean tastes with the indoor-outdoor seating at Ravello; a lively poolside restaurant; golf clubhouse restaurant Plancha; a great lobby bar overlooking the lake, and coffee bar Lickety-Split.

BONUS: Kids 5 and under dine FREE! (With a few exceptions, so check with your restaurant staff.)

That first afternoon we wanted to enjoy the Florida sunshine, so we made our way to the Lobby Bar balcony. Overlooking the grounds with the theme parks just visible on the horizon, we ordered a light snack and toasted to the beginning of our Disney family vacation. (And my granddaughter twirled and twirled showing off her tiara and princess skirt.

Most definitely the highlight of my daughter’s Disney vacation was the character breakfast at the Four Seasons Orlando. The bi-weekly Good Morning Breakfast with Goofy & His Pals is located at Ravello restaurant. My granddaughter is a HUGE Mickey and Minnie Mouse fan. We surprised her on our first morning in Orlando with meet-and-greets with her favorite Disney characters. The buffet-style breakfast is offered on Thursdays and Saturdays.

While the food was fantastic, witnessing the excitement on my granddaughter’s face when she met Minnie in-person for the first time — magically priceless!

Save $53 on a Disney World 4-Day Park Hopper! Hop through all 4 parks.

What is your favorite Walt Disney World luxury resort? Share with us in the comments below.

Top Things to do in Florida Outside of Disney World 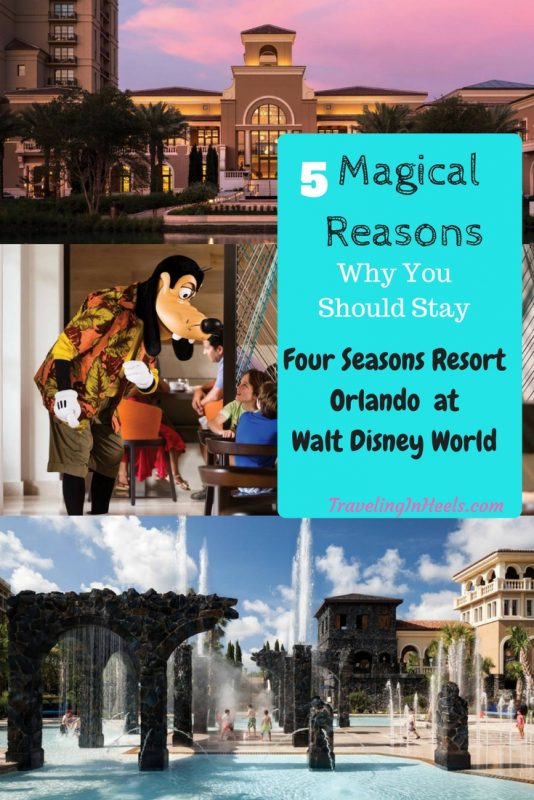 Spring Break Travel Deals to Telluride, Colorado Why You Should Visit Toy Story Land This Summer