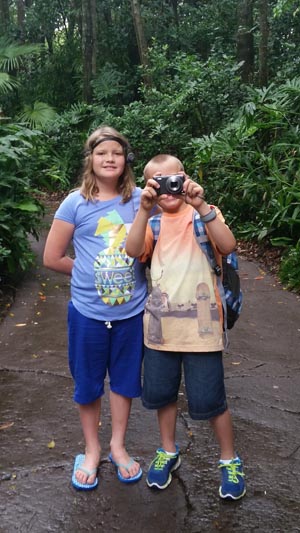 Bring the grandkids to Walt Disney World — for the first time. Give them a quick lesson on how to use the  Panasonic HX-A500 wearable video camera. Push the little grand “birdies” out of the nest and let them capture video. Yes, I’m tagging along with them, because I too love Disney theme parks and rides. Now all you have to do is watch the YouTube video. Now go. 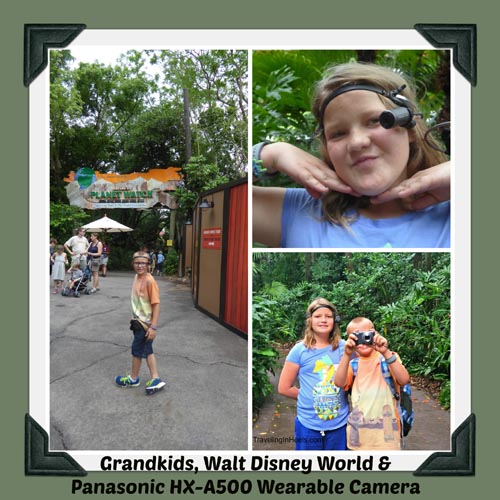 Give the grandkids the Panasonic HX-A500 wearable camera and let them loose in Walt Disney World. Boom! We’ve got a Panasonic Adventure!

Calling all technical geeks and camera addicts.  Have we got a video camera for you! Introducing…the Panasonic HX-A500, priced at just $399. A wearable camera, it’s a GoPro camera on steroids, and kids of all ages love it. The recorder is fastened to a head mount (elastic head band) with the camcorder positioned by your ear at eye level. This video camera is hands free with a built in viewable LCD slipped into an armband case. Wearing it is simply fun and Star Trek-like.

Capturing video has never been more high tech than when Panasonic presented our group of TravelingMoms the cutting edge Panasonic HX-A500 while on a Disney World Retreat.  Turn it over and go ahead and say it – what is this thing? It doesn’t look anything like a traditional video camera, actually more like a fancy hippies headband connected to a microphone.

The recently introduced lifestyle-oriented Panasonic HX-A100 wearable video camera allows for hands-free video recording. HD video can be captured at 1920 x 1080 at 60 fps – and yes, that awesome Panasonic 4K Video technology is also an option. Wi-Fi connectivity allows users to connect a smartphone or tablet to start and stop recording. The HX-A100 is also waterproof up to 5 feet.

My multigenerational family had joined me on this Orlando trip (and their first visit to Walt Disney World in Orlando, Florida).  I shared the privilege of reviewing the Panasonic HX-A500 wearable video camera. We all took turns at wearing this beauty — geekie, hippe band-like camera, resting near our ear at eye level.

Why Your Multigenerational Family Will Love This

Did I say it’s cool?  My 10 year old granddaughter called it cooler than a GoPro when she was diving into the pool at Disney’s Coronado Springs Resort. But what’s fun about this is capturing the moment live and in impressive clear video, thanks to Panasonic wearable video. We also explored Animal Kingdom’s Rafiki Planet Watch, and both grandkids took turns wearing the camera and shooting video. 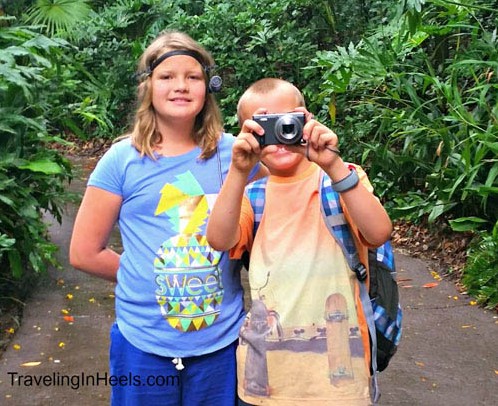 It was a Walt Disney World multigenerational family travel dream come true, experiencing Disney together. We stood in line; we took advantage of the fast pass. We rode a lot of rollercoasters. We got rained on. We bought Disney rain ponchos. We put a lot of miles walking the Disney parks, all of them. Yes, my feet hurt, and we all dropped into bed exhausted but happy at the end of each of our 4 days at Walt Disney World. 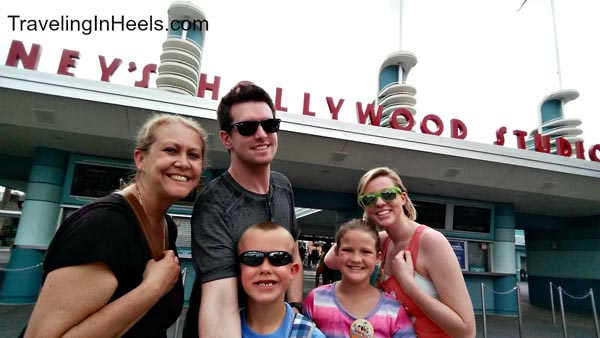 Taking the multigenerational family to Walt Disney World for vacation.

This Panasonic Video is LIVE with shots of our multigenerational family enjoying Walt Disney World, narrated by my grandchildren. This video documents what happens when one Traveling Grandmom, two grandchildren, one college-aged stepdaughter and her boyfriend spend 4 days in the theme park lines at Walt Disney World. This is the thrill of the Walt Disney World rides — live and unscripted (okay maybe a little scripted).

From rollercoasters to railroads, this video is shot from the viewpoint of two grandkids (ages 8 and 10) and their first time in Walt Disney World, while traveling with Grandmom and their Aunt. Ok, now you can go watch the #PanasonicAdventure YouTube Video.

Panasonic Kept Me Connected to Home!

If you’re like me, leaving home for an extended period of time can be nerve wracking. Sure, my hubby was at home taking care of everything, but he works outside the home. Our dogs are used to be me working at home.  Installing this Panasonic Home Monitoring System gave me peace of mind because all I had to do was open the app on my iPhone to see what was going on at home while I was in China and Walt Disney World.

DISCLAIMER: Panasonic provided the HX-A500 wearable video for our review; opinions expressed are our own.