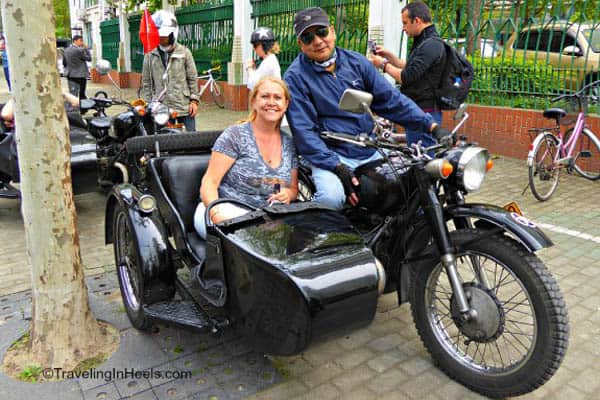 Riding with the top down, whether it’s a Mustang convertible or on a motorcycle, is one of my favorite ways to experience a city.  But a Vintage motorcycle sidecar? That’s one to top the bucket list, and exploring the busy city of Shanghai , China, riding a vintage motorcycle sidecar, well, totally priceless, and how I began my journey embracing the culture of China.

One of our many #BucketListChina experiences, riding in a vintage motorcycle sidecar in Shanghai with our hosts Mandarin Journeys.

When I received the Mandarin Journeys invitation to experience China, sure, I was intrigued with exploring ancient China; experiencing traditional tea ceremonies and Tai Chi; hiking tea plantations; and sampling Chinese culinary dishes. But the opportunity to ride in a vintage motorcycle sidecar?  That’s what would make this trip #BucketListChina!

My motorcycle adventures began at about age 4, climbing into a sidecar with Uncle Bob in Missouri Valley, Iowa, to ride to Sunnyside Cafe for an ice cream sundae treat. No doubt — that’s when I first fell in love with the thrill of motorcycles.

What sustained me through jet lag on my first day in Shanghai, exploring the busy streets, was the scheduled afternoon sidecar ride. Three vintage motorcycle sidecars and their drivers met us at the Renaissance in the historical Pu-Xi Shanghai city. Our 2-hour tour of Shanghai would be on 750cc Chang Jiang motorcycles; replicas of Russian design that was itself a copy of a pre-WWII 1938 BMW R71 tooling, a German BMW sidecar model.

The six of us loaded into the motorcycles, 2 to each one – one in in the sidecar, one on the back of the bike.  I was lucky enough to relive my childhood by riding the sidecar. Our 2-hour Shanghai Insiders tour included not only the experience of riding sidecar tour of Shanghai but also the chance to stop, park the motorcycles, and explore.

I love the wind in my face, and apparently, the sight of this sidecar was an unusual sight. Many pedestrians would stop and stare, even snapping photos – and lots of selfies! – as our 3 vintage motorcycles and sidecars passed.

And Shanghai traffic?  Well, it’s all about not looking them in the eye, being aggressive, and tight maneuvering — and a whole lot of luck, which my driver, who didn’t speak English, did exceptionally well.

As I watched the locals from my vantage point stretched out in the sidecar, an older Chinese couple caught my attention. They were easily in their 70s, standing on the street corner, hand-in-hand, watching us pass by. It was a genuine moment for them, grasping each other, simply because they wanted to be together, to hold hands, to walk the busy Shanghai streets.  And their aura was beautifully surreal and content. Almost as if I were an interloper on the magic of their intimacy, each watching out for the other, as they had likely done for decades.

A moment I would think about often during my 9-day visit to China. 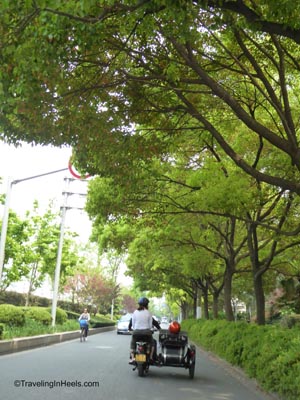 Riding the vintage motorcycle sidecars through the Former French Concession, an appealing tree lined part of Shanghai, popular with expats and locals alike.

We stopped at the M50 “Moganshan Road.” an art district loaded with contemporary artists, for a quick visit and then drove off into  Former French Concession (popular with expats and locals alike), an appealing tree lined part of Shanghai, where the branches stretch across the street nearly touching the other side. We ended the tour at Tianzifang, another quaint pedestrian area, formerly a residential area with old storage facilities and now a popular walking district lined with boutique shops, restaurants and craft stores.

I reluctantly exited the sidecar, and for the first time since landing nearly 24 hours ago in Shanghai, I was completely de-stressed. Tucked into the back of mind, I continue to carry the visual of the older Chinese couple holding hands.