Who doesn’t love a day out at the beach? It’s an essential tradition for many of us; ice cream, sunscreen, a dip in the saltwater, and sunning yourself on the sand. What could be better than that? But you shouldn’t limit your beach vacations to the West Coast. Read on for the definitive U.S. East Coast Beach Guide — and get ready to be surprised.

Where to Go for your Next Beach Vacation?

There’s plenty of beaches to be enjoyed right here in the United States, but they don’t all receive equal attention. It’s fair to say that the eastern coastal states often get short shrift when it comes to the popularity of beaches. If you asked someone to think of a state with a great beach, the answer would probably involve one of three states: Hawaii. California, or a beach belonging to a tropical overseas territory.

Of course,  these states do have a range of truly fantastic beaches — with one thing in common. All these are Pacific Ocean beaches on the western side of the USA. While there’s no doubt the warm waters of the Pacific have plenty to offer a beach-loving tourist, what about the other side of the map? Maybe it’s time to shed some light on what beaches the eastern coast offer?

You don’t have to travel to the west coast of the United States to get the chance to enjoy a glorious beach day experience. Whether you’re just planning a weekend break or want to find a place to spend a long, soothing vacation by the sea, there’s an east coast beach just waiting to delight you. What’s more, as these areas are less well-known, you have more chances to enjoy the space without being surrounded by fellow tourists!

Let’s go through all of the eastern coastal states and pick a single beach that stands out above the rest. Surely of the many options below, you will find one beach that tempts you away from the Pacific, and into the charming sands of the east coast beaches?

Of all the states in the US, Maine is probably the best known for its seafood. Lobsters, shrimp, crab, and plenty more are caught on a daily basis and served fresh to eager diners. Stay around the Long Sands Beach area to make this most of this perfect cuisine. As well as the food on offer, you can while away your stress by strolling on the mile-and-a-half of the beach, enjoying the crashing might of the Atlantic Ocean.

If asked to name a coastal state in the United States, it’s fair to say that few of us would have New Hampshire at the top of our list. Yet there’s plenty of beaches to be enjoyed. Our top pick: Wallis Sands near the northern tip of the state. There’s the usual sand-and-sea affair, but also plenty more for you to explore. There’s plenty of wildlife to see, as well as the opportunity to take a cruise around the Isles of Shoals.

Still need convincing? The picture below should have you itching to pack your bags!

When it comes to finding the best beaches in Massachusetts, there’s so many to choose from (including the always popular Cape Cod) that it’s impossible to choose just one.

However, the best pick is probably Revere Beach; a highly rated coastal enclave that won’t disappoint. Just four miles from Boston, this easily-accessed beach was the first ever public beach. However, it’s best avoided in high summer, as Bostonians flee to Revere Beach in their thousands — so save your visit for springtime.

Unlike Massachusetts, there’s no debate as to which of the Rhode Island beaches comes out on top: it’s Easton’s Beach without a doubt.

Here you can laze the day away on the sand, or go for something more high-octane by visiting the nearby carousel and attractions. The beachfront itself might only be small at less than a mile, but there’s no doubt that Easton’s Beach packs as much as possible into its footprint.

Beach and Sand in Connecticut

For something a little different, head to Hammonasset Beach in Connecticut. As well as all the usual beachfront features, kids will love exploring the rocky outcrops and the views over the water. With two miles of beach to enjoy, you can mingle with your fellow tourists, or find your own quiet spot to enjoy the sunshine.

Exploring the Beach and Boardwalk in New York

If you’re going to head to a beach in New York, then look no further than the legendary Coney Island beach and boardwalk. This area has been delighting tourists for over a hundred years with its rides, attractions, a pier, and gorgeous well-preserved beaches. It’s the perfect day out, providing the weather cooperates.

If you prefer your beaches a little more secluded, then Fenwick Island State Park is by far the best choice. This little-known gem might not have the bright flashing lights and attractions of other beaches, but it offers a quiet spot to enjoy the sand– or perhaps even try your hand at the surfing this area is famous for.

Another easy pick for the best beach here; Sunset Beach in New Jersey is the jewel in the Garden State’s crown. The beach is famous for its flag ceremony, as well as the wreck of the SS Atlantus.

The Atlantus was a concrete ship constructed during the First World War; it ran aground in 1926, and the wreckage has been fascinating beach-goers ever since. There’s not much left of the wreck now, but it still makes for an interesting, eerie feature of this gorgeous beach. As for where the beach gets its name, perhaps the photo below will help to explain it.

Lighthouse and Beach in Maryland

Another state that a few of us wouldn’t think of when listing coastal states, Maryland actually has a fair amount to offer the avid beach-seeker. Perhaps most intriguing is Sandy Point State Park, which offers views of Sandy Point Shoal Light. This unique lighthouse appears to float on water. If you want to escape the beach itself for a while, there are four miles of hiking trails nearby.

If wildlife is an essential part of the seaside experience for you, then look no further than Knotts Island. Technically shared by North Carolina and Virginia, it’s a wildlife haven that you won’t want to miss.

Take the 45-minute ferry over to the island, then visit the Mackay Island Wildlife Refuge to see sea creatures, reptiles, and even a pair of bald eagles in their natural habitat. The nearby beach offers stunning views onto the Atlantic Ocean.

The Shores of North Carolina

Hammocks Beach State Park has got everything that you could possibly want from a trip to the North Carolina shore. The sand is perfect, the water clear, and there’s plenty of attractions and nearby hotels to enjoy. If you want to take to the water, a number of islands are within a short boat ride. Bear Island is a particular favorite for fans of camping or kayaking.

South Carolina has a lot to offer in terms of beaches, but it’s hard to look past the glittering Myrtle Beach if you’re wanting a seaside experience. Actually the name of a city that covers the shoreline, Myrtle Beach has plenty to offer, including a huge ferris wheel and a variety of seafood restaurants to tantalize any palate. If you need to burn off the calories from indulging in the food, then there’s every watersport imaginable available from the beachfront itself.

Why choose just one beach when you can have a whole island full of them? The state of Georgia includes Jekyll Island, a paradise for any fan of beach vacations. There’s 10 miles of beach in total, so you won’t be disappointed if you want to spend an afternoon basking on the sand in relative quiet. The star of the show is probably Driftwood Beach, which — as the name suggests — has plenty of washed up items to explore.

Florida has both an Atlantic and the Gulf of Mexico coasts, so choosing one beach per coastline seems fair.

For the Gulf of Mexico, the best pick for our East Coast Beach Guide is the Panama City Beach. Close your eyes and picture your dream beach; it probably looks an awful lot like what Panama City offers. You can wander across the sands, look out onto the warm, clear waters of the Gulf, then head back to Sterling Resorts to get ready to enjoy the Panama City nightlife.

Alternatively, the Atlantic coast also offers a variety of great beach destinations. If you want somewhere less crowded, then South Beach Park near Boca Raton might be your best bet. You can go sea fishing, enjoy the sumptuous beach facilities, and there’s plenty of bird-watching opportunities to be enjoyed.

Which beach would you add to our East Coast Beach Guide?

Though there’s no doubt that Hawaii and California have great beaches, don’t overlook the bounty available on the eastern side of the US. These beaches might not be as warm year-round, but they are packed with fascinating points of interest and majestic wildlife waiting to be discovered.

Did we tempt you with our East Coast beach guide?  Did we miss your favorite East Coast Beach? Share your top beaches in the comments below. 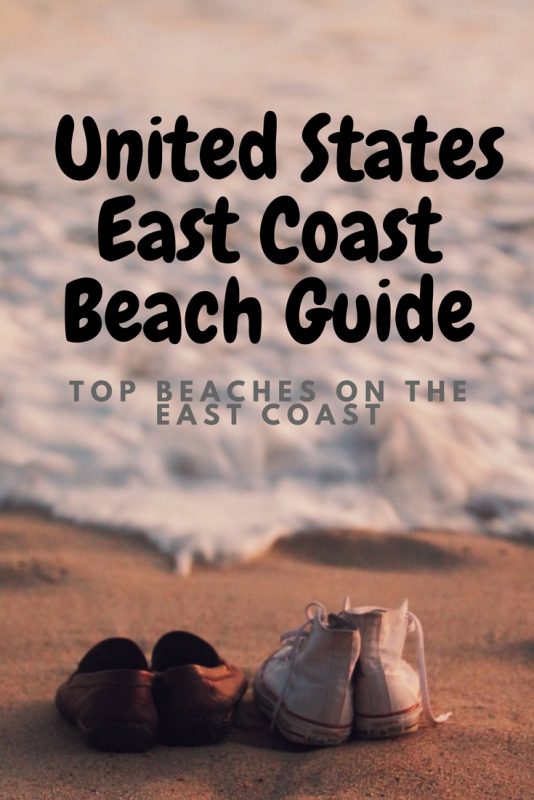 Travel Hack: Colorado Springs Hotel Room for $20 Bucks Top Things to do in Florida Outside of Disney World

How Romantic Travel Strengthens Your Relationship