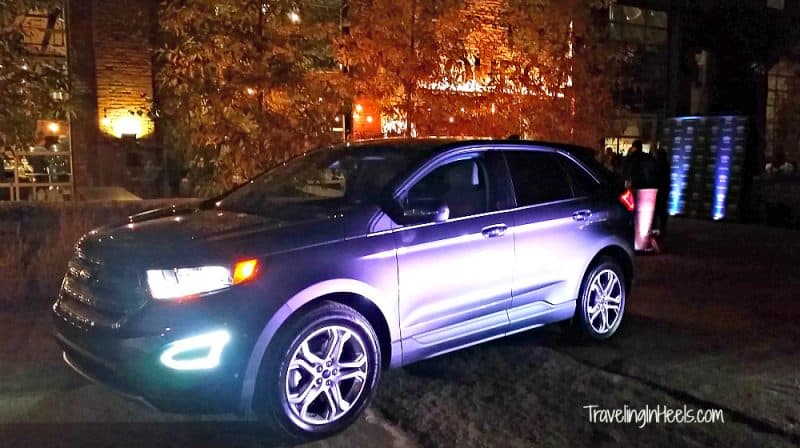 When given the opportunity to test drive the 2015 Ford Edge, they had me at Ford. As a long time Ford owner, I’d heard all the hype about this second generation midsize SUV. I was all about checking it out, enticing my BFF Vicki to join me with an invitation to dinner and a test drive for an #EdgeNightOut.

The location of the Ford Edge media event was at Denver Acorn, a unique, eclectic, contemporary bar and grill in Denver’s River North District. Located in a reclaimed 1880s foundry called the Source, the restaurant was a convenient midpoint between my and Vicki’s home, but admittedly a bit difficult to find in the dark on the poorly lit Brighton Boulevard. We arrived within minutes of each other, finally locating the restaurant and parking across the street.

The parking lot  was lined with 2015 Ford Edge cars, just waiting for test drives. Ford celebrated the event with a “red carpet” sign, which we couldn’t resist posing for a photo.

We were directed inside where a team checked us in via an iPad and asked us a few questions, verifying our valid drivers license, before directing us to a test drive. 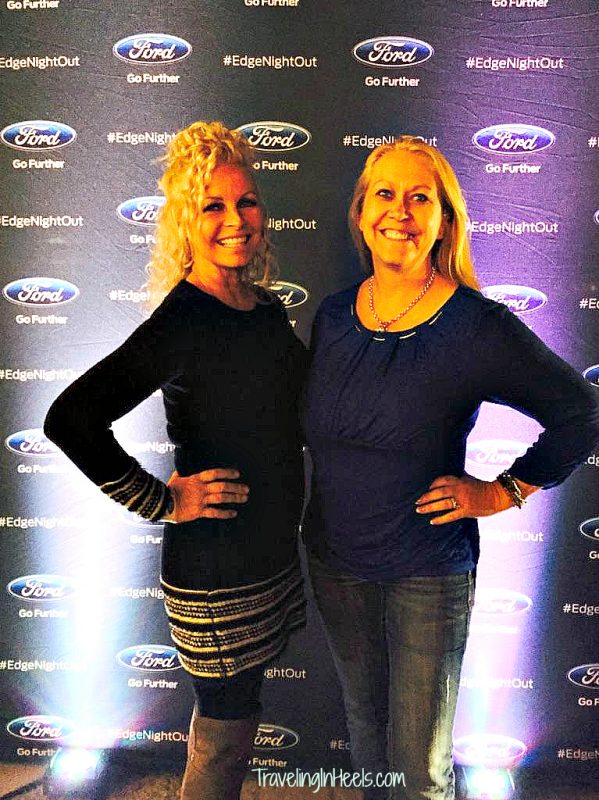 I’m a committed Ford vehicle owning family, currently driving a 2014 Ford Escape Titanium with that ass kicking EcoBoost. (We have two more Fords in the driveway: ’03 Ford Expedition and an ’02 Ford F-150. )  My friend Vicki owns a Mercedes SUV. But we all arrived with an open mind and curious about the new Ford Edge.

At first glance, seriously the 2015 Ford Edge is freshly designed into a super sexy and sleek 5-passenger crossover SUV with a surprisingly roomy interior and whole lot of modern-tech options.  And I have to say its grille is also a sexy design with cool aerodynamics, featuring active grille shutters for extra fuel savings.

A 245-hp 2.0-liter turbo four-cylinder powers the base model; either a 280-hp 3.5-liter V-6 or a 315-hp 2.7-liter twin-turbo V-6 are optional. Choose from front- or all-wheel drive with 6-speed automatic. Rev it up with the EcoBoost that is earning Ford brand a lot of accolades, and you’ve got some surprisng get-up-and-go.

Behind the Wheel of the 2015 Ford Edge

Now for the true test: getting behind the wheel of the 2015 Ford Edge. It was like sliding into luxury, seriously. From the seats to the steering wheel to the humming of the motor. And I keep going back to the sleek and sexy, but that’s how it drove as well. My BFF even commented that she was surprised by how well the Ford Edge handled compared to her Mercedes.

Our test driving co-pilot mentioned that the Edge uses a sedan-based platform, which gives it the smooth car-like ride, while the cargo capacity is more similar to an SUV. And as you can see on this photo, yes, there is plenty of room to roam in the Ford Edge, which is important to me and my friend Vicki who are both grandmoms, requiring plenty of space to load the grandkids into our cars. 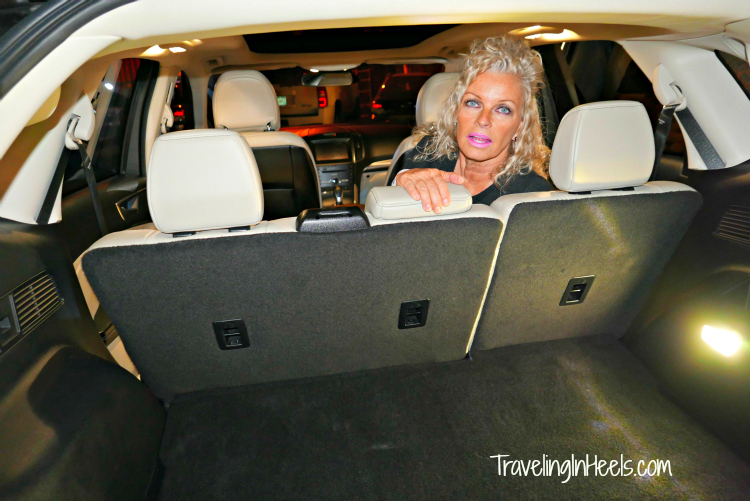 The interior and cargo space of the new 2015 Ford Edge is roomy and comfortable.

Another key feature, especially for those driving in winter conditions, is its Intelligent AWD, enhancing traction and handling on various road conditions. It does this all automatically with its  Intelligent Terrain management System, measuring all sorts of road conditions and AUTOMATICALLY sending signals to adjust to these conditoins.  LOVE!

All that and Technology too!

The all-new Edge has more driver-assist and semi-automated technologies than any other crossover on the market. The Edge is a technology showcase for Ford, with the company’s most popular features, including SYNC with MyFord Touch, Rear Inflatable Safety Belts, Hands-Free Liftgate, BLIS, Adaptive cruise control and forward collision warning with brake support as well as Lane Keeping Assist.

We test drove a 2015 Ford Edge model, total MSRP $45,045, overflowing with extras including remote start, heated seats & steering wheel, enhanced park assist, panaromic vista roof, rain sensing wipers.  And for those with children, the 180 degree Front Camera (in addition to rear camera) is yet another way to watch out for your kids.

Bottom Line: Thumbs Up to the Redesigned 2015 Ford Edge

My Ford Edge test drive was a short 10-15 minutecity ride which didn’t include highway driving.  But I was impressed with its re-engineering.  Ford has stepped up their game with the 2015 Edge, competing with rivals like Nissan Murano, the Toyota Venza and Jeep Grand Cherokee. 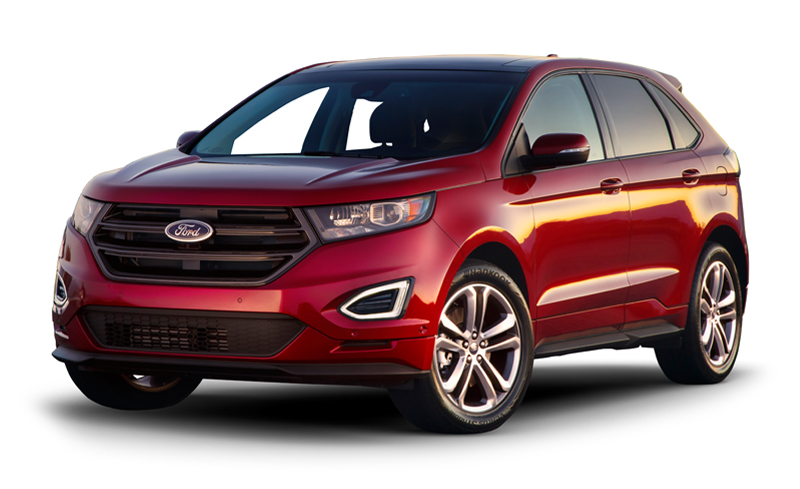 All the hype is spot on. Yes, it’s true. The all-new Edge builds on a proven formula that has made Edge the best-selling medium crossover utility vehicle in the U.S. – technology customers really want, versatility and a vehicle that delivers on the promise of adventure, of doing more and going places.

According to the 2015 Ford Edge with Consumer Marketing Manager, Cristina Aquino,“The Ford Edge is a showcase of Ford innovation.  Our customer tells us over and over again that they value the confidence that comes with all that technology – whether it’s helping steer you into a parking space, opening the liftgate with a sweep of your foot, or helping you see around corners with our 180 degree front camera.”

And I agree.  With a starting sticker price of $28,100 (add-ons up to $45K), you’re going to see a lot more Ford Edges on the highway, and this gal has another Ford on her wish list.

Disclaimer: Ford provided the opportunity to test drive the 2015 Edge; opinions expressed are my own.