All Aboard! Riding the Cumbres-Toltec Scenic Railroad, Colorado & New Mexico

To say I was excited to ride America’s longest and highest narrow gauge railroad, the Cumbres & Toltec Scenic Railroad was an understatement. Our rail journey would be a 64 mile ride from the rustic train station in Antonito, Colorado, to its counterpart in Chama, New Mexico, winding in and out of both states 11 times.

I’m obsessed with train travel. Every time the conductor shouts “all aboard,” my heart twitter pates in anticipation. To me, train travel is symbolic of a step back in time to the Old West, living a page of history in the sounds of the clickety-clack of the wheels on the rails, the whish of the steam engines, and, most importantly, the incredible views.  I’ve stepped on board other iconic trains in Colorado, but this would be my first time on the Cumbres & Toltec Scenic Railroad. 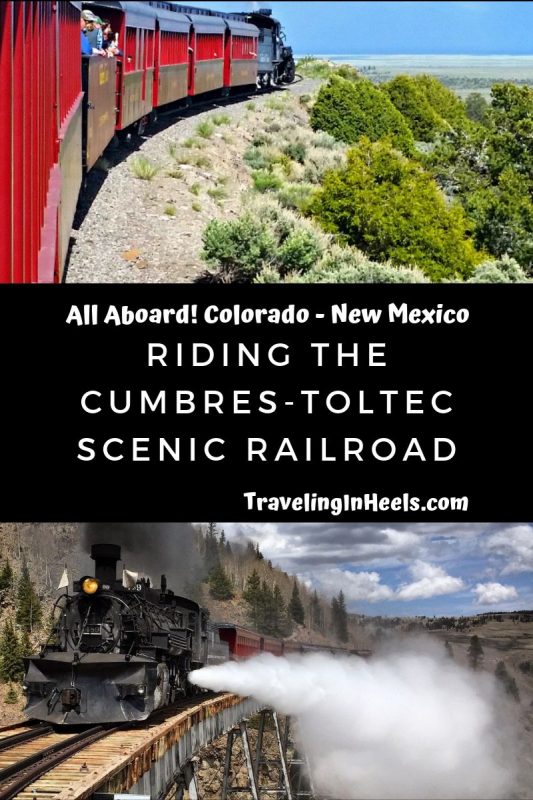 Built in 1880, the Cumbres & Toltec line was part of the Denver and Rio Grande extension into the silver-rich San Juan Mountains near Silverton, Colorado. Service on this line was discontinued in 1969, and in 1970, the states of Colorado and New Mexico saved the equipment and buildings from being scrapped by jointly purchasing the line. The Cumbres & Toltec Scenic Railroad is the longest, highest, and most complete example of late nineteenth and early twentieth century narrow gauge railroading in the United States.

A National Historic Landmark since 2012, you’ll literally step back in history from the moment you board. Join the ranks of thousands of passengers who have ridden this train, including Butch Cassidy, the Sundance Kid, and Indiana Jones.

Yes, I know, I can hardly contain my excitement either. 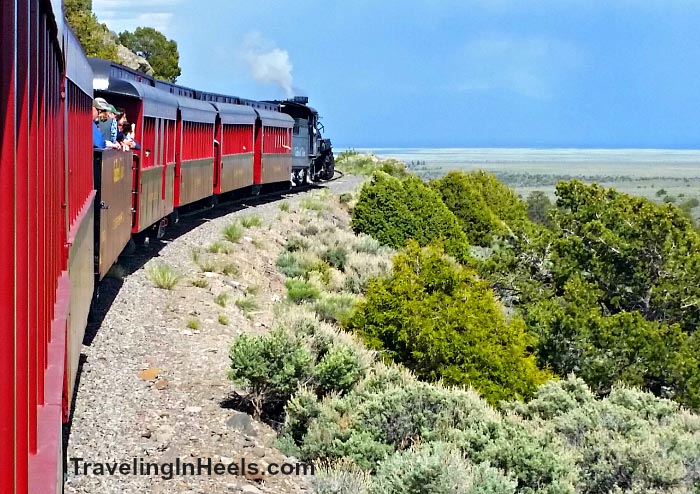 The Cumbres & Toltec Scenic Railroad earned its name honestly — you’ll see parts of both Colorado and New Mexico that will have you saying “wow” and “ah” at nearly every turn. A cloud of steam marks the way as the train chugs along 64 miles of narrow guage track, at speeds of 12 to 22 miles per hour.

The remaining 3/4 of the eastbound trip is downgrade, and the locomotives are fairly quiet. Westbound from Antonito, the grade may be less, but the locomotives periodically work harder, especially again on the last couple miles to Cumbres Pass.  And that’s when you see the smoke and hear the engines!

The line passes through Rio Grande and Carson National Forests. Most of the line is bordered by rocky ledges, cliffs and formations of varying types. The train passes along the rim of Toltec Gorge, a spectacular, though brief highlight. Conifer and aspen trees dominate with periodic mountain meadows. The aspen trees turn a brilliant yellow in the fall making those trips popular. The easternmost quarter shifts to scrubby and arid rolling hills. There are numerous restored historic structures along the line, including two tunnels, bridges, section houses and water tanks.

Travel is filled with bumps in the road, and in this case, bumps on the rails. From the Antonito, Colorado, train station,we were ready to put the steam to the engine, but unfortunately, after an hour delay attempting to repair, the train engineers reported that the air compressor (or something like that) wasn’t working.  Well, you do know that train brakes are air brakes?  Yeah, going up the scenic mountain passes would be great, but coming back down would be like a scene from Speed, only in a train.

Kudos to the C&T RR staff who gathered the passengers and offered options 1) board bus to meet Chama train at Cumbres; 2) re-book for another day; or 3) full refund.  We opted to take the bus to Cumbres as we were told we would still see the best views on our return to Antonito,. Although we wouldn’t ride the full 64 miles, we would only miss the 14 mile, not-as-spectacular ride from Cumbres to Chama. Upon our return, we’d road trip our way to Chama, where we’d planned to overnight.

And we were not disappointed. Since we were joining a train coming from Chama, we did forfeit our reserved seats, but as luck would have it we were able to find a seat in the Parlor Car.

Be Prepared to be Wowed!

Mountain passes, trestles, curves, rocks, gorges, tunnels, oh my!  The scenery is awe-inspiring, and you truly will feel like you have stepped back into the nineteenth century from the when riding the Cumbres & Toltec Scenic Railroad.

The mid-way point between Antonito and Chama is Osier, Colorado, elevation 9,637 feet. Before the railroad built tracks here, this was a toll road connecting Chama Valley with San Luis Valley, and from where it’s located, you can see it had to have been quite remote. In 1880, the D&RG established a construction camp in Osier.

Now there’s a stock pens, water tank, section house, and station. The dining hall is where passengers are served a a buffet, but this is actually really tasty, with homemade, served from scratch meals. (I choose turkey — and it was yummy!)

Minutes from our arrival at Osier, I happened to be taking photos at the back of the parlor car, and a Native American breezed by on his horse. It was the coolest thing. The Native American later showed up in full dress (with saddle), posing for photos and accepting tips.

Bathrooms and concession car with snacks and gifts are available on the train.

The Cumbres & Toltec season runs May to October, and fares depend on the season. Trains depart each morning from both Chama, New Mexico and Antonito, Colorado. In peak season, Cumbres & Toltec offers daily departures from either direction, meeting at Osier, the midpoint of the line where lunch is provided. Passengers may choose to continue riding the train to the other end or switch trains to return to their original terminal.

If you continue the entire journey, a complimentary  motor coach will bring you back to your original terminal (Antonito or Chama). All seats are reserved. Seats are sometimes available to walk-ups, but advance reservations are recommended especially in peak season.

For more information or to book, go to Cumbres & Toltec Scenic Railroad website 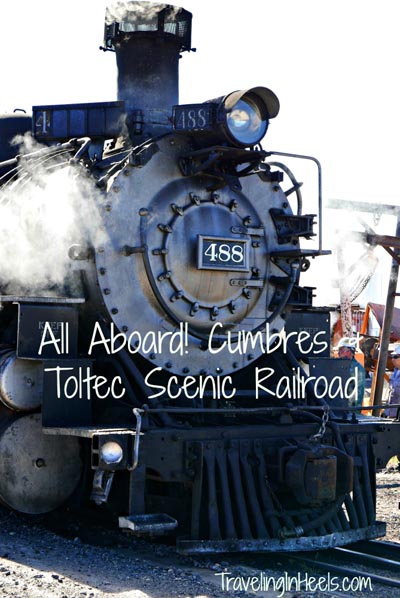 Cumbres-Toltec Scenic Railroad provided the train ride for review; opinions expressed are my own.

Most Important Things to Pack When Traveling

Traveling for Fashion and Why You Should Try It