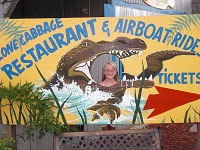 Please welcome my 10 year-old niece Journey (yes—that’s her real name!) as a guest blogger this week. She recently traveled with me to Orlando for a series of firsts. Since she wants to be a writer, I thought I’d give her the assignment of detailing her impressions of her first Orlando, Florida adventure with her Aunt Nana (that’s me!).

Read on for my amazing niece Journey’s travel impressions of the first days in Orlando, Disney’s Magic Kingdom and Hard Rock Hotel. I did take the liberty of adding my comments in [brackets]:

Guest blog by Journey
Have you ever been scared and excited at the same time? Well I have! Before I got on the airplane I was so scared to leave my mom, but I was so excited to be able to go to Orlando, Florida. The airport was so crowded. I could barely get through to our seats.

When the plane started to go, I got that funny feeling where you feel like you’re going to throw-up. A few minutes later, it started to get boring [I know what you mean, Journey!]. I couldn’t find anything to do so I just went to sleep. When I woke up we were at the airport. 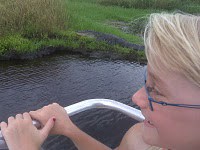 Journey’s first gator sighting Once I got out of the Orlando airport, I went to a little restaurant with airboats [Lone Cabbage Fish Camp with two of my aunt’s friends]. After Aunt Nana had a beer [Hey, I wasn’t driving!], we went on the airboat. A few minutes later, we saw alligators right in front of us. Later we saw an alligator right in front of us on land. When we got closer, the alligator hissed at us and I jumped back. We also saw another alligator on land and we got really close to it. That alligator didn’t hiss, but he did come after us so I ran back to my seat. I was so scared that we had gotten lost on our way back to the restaurant. When I saw the bridge, I was so excited we had made it back! When we got out of the boat, we headed to the ocean.

Journey & Aunt Nana at Cocoa Beach When we got to Cocoa Beach, I saw a HUGE restaurant. As I got closer, I took off my shoes and ran towards the water. It was so fun because I went half way out until two huge waves came. When the waves got to me, my shorts and part of my shirt got soaked! I had so much fun at the beach that I started to get hungry.

We went to the [beachfront] restaurant and started to go in until the people who worked there stopped us and asked us for our ticket. Apparently, a ticket was needed to eat at that restaurant. I was so mad I couldn’t eat there. Then we found another restaurant, but you had to be twenty-one to go in there. Aunt Nana said to show them my fake ID [I know, Aunt Nana is funny!], but it was too late for that because we already left. When we got back to the car, I had to change my shorts because they were wet and rubbing against my legs. Then we started to head back to the hotel.

Journey’s 1st hotel: Hard Rock Orlando When we got to the Hard Rock Hotel, I was so shocked by how it looked. It was HUGE! The hotel had a fountain with guitars. Then came the hotel room. I stepped in the door and it was beautiful. It had a huge TV, a big bathroom, and food on a tray. I loved the hotel from first sight. Outside there was this HUGE pool with a big slide. The dinner was delicious [Kitchen Restaurant, on-site a the Hard Rock Hotel]. I had homemade macaroni and cheese. I also had hot tea and water. After dinner I went to bed. The bed was so comfortable, and I slept like a baby.

Journey’s visit to Disney’s Magic Kingdom The next morning I woke up and I got dressed. Then I made my bed and went downstairs to the lobby. When the car arrived to go to Disney World [courtesy of Aunt Nana’s friend Rick!] I was so excited. When we got to Magic Kingdom, I was so amazed with what I saw. Cinderella’s castle was so big. I finally got to see the castle in person.

Aunt Nana and I had gone on a few rides like Aladdin’s Magic Carpet and a little roller coaster called Thunder Mountain twice. I also went on a few other rides that I don’t remember. Then we took the monorail to Disney’s Polynesian Resort [Aunt Nana wanted to see a Disney resort] because we got so tired of walking.

From there we took a taxi back to Hard Rock Hotel [about 30 minutes], where I took a short nap.After I woke up I had to get in the shower. Then I got ready for dinner again at the restaurant at The Kitchen with thirteen or fourteen other people. [We met up with the Universal Studio folks and other arriving media.] It was so tiring to walk. Dinner was delicious, but I was very, very tired. After dinner I went straight to bed.

From Aunt Nana, aka Diana, TravelingInHeels.com:  Journey learned really quickly that it’s exhausting being a writer, but she’s ready to do it again.  She’ll also agree that wearing comfortable shoes is important!

Journey’s journey continues tomorrow with her visit to Universal Orlando, The Wizarding World of Harry Potter.