My 10-year-old niece Journey continues her blog on her travel adventures in Orlando — where she already experienced many firsts.  This blog is day 3 at Universal Orlando and the Wizarding World of Harry Potter. The 20-acre themed area includes the village of Hogsmeade and numerous shops and rides. (Pictured Left — Hogwarts Castle)

Journey writes: On the third day we had to meet in the Hard Rock Hotel lobby with thirteen other people to go to this theme park. It sounded really fun and when I got off the water taxi I was so amazed by what I saw. Everyone that came to the lobby was a VIP — VIP tours available to anyone!). We were heading to the Wizarding World of Harry Potter and I was so excited.

Journey noticed that the tourists in Universal Orlando, especially the Wizarding World of Harry Potter, came from all over the world, different countries with various accents, languages and cultures – and all ages.

Note from Aunt Nana: Before our Forbidden Journey ride, we walked quickly to the replica Hogwarts Express, to meet the biggest wizard of all, the architect that designed this theme park, Mark Woodbury, who spoke about he and his team’s excitement for the entire project. Woodbury’s design team met with Universal Studios and JK Rowlings several times to make sure everyone was on the same page. They’ve done such a great job re-creating the magical world of Harry Potter that you’ll think it’s real. 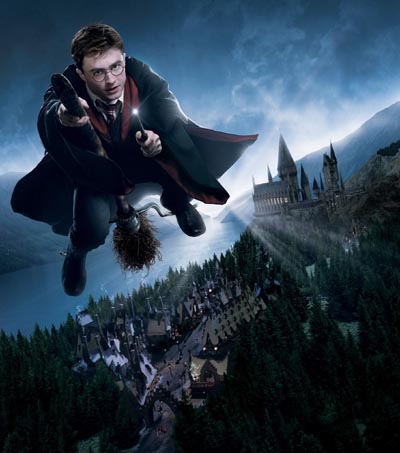 Back to Journey’s comments:
The first ride we went on was called Harry Potter and the Forbidden Journey (pictured right). It was really fun but yet really scary. We went upside down, side-to-side and straight, guided by Harry Potter. There were spiders and ghosts. It was the scariest ride ever.

The next ride we went on was the Dragon Challenge. The seats were hard and the coaster was shaped as a dragon. The ride wasn’t as exciting but it was really fast.

Then we went to see a wizard at Ollivanders. Since we were VIPs, we didn’t have to wait in line and also saw the behind-the-scenes action. After the wizard talked about how to pick a wand, I choose my own magic wand from the gift shop – the only place in the world that you can purchase a real Harry Potter wand! 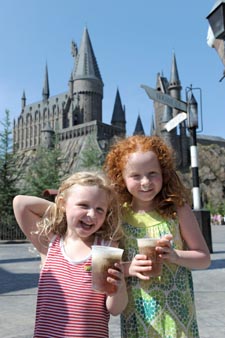 Then we ate lunch at Three Broomsticks . The food was so delicious – and the butter beer was yummy (pictured left)! It tasted like a mix between root beer and cream soda.

We went on two water rides. The first was where you were in a little log and you went on all these hills and we got soaked. The last one was in Jurassic Park River Adventure. It was so cool. There were all these dinosaurs and there was a T-Rex in a box. It almost fell on top of us. Then we went down this HUGE hill. I got soaked. (Journey didn’t know but this thrilling drop is an 85 foot plunge and the longest water descent ever built.)

We finished up at the fun Suess Landing, where no lines run straight, and rode their water ride twice!

When we got back to the hotel, I got in the bathtub. After that, I took a quick nap. When I woke up, I had to get ready to go to dinner at Hard Rock Café on Universal City Walk. The food was delicious. I couldn’t believe how big the café was. My picture was taken with three other kids, guests of the other writers in the group. 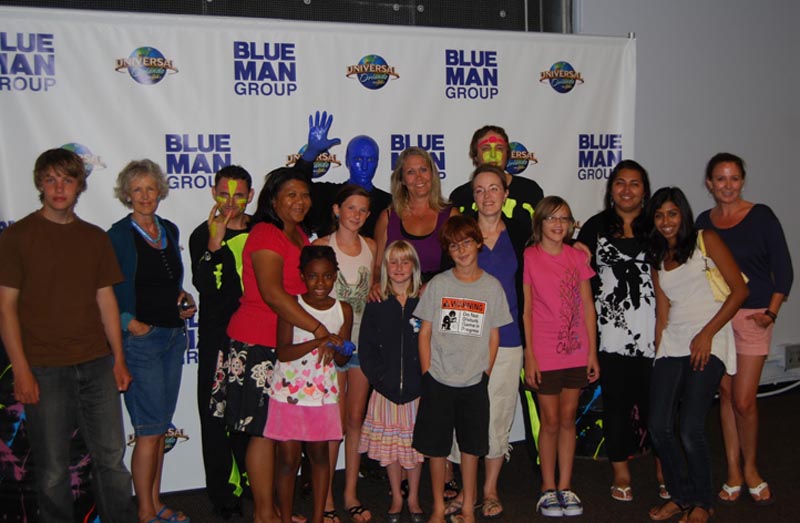 After dinner, we walked to see The Blue Man Group. The show was so cool! The group played the drums with colored paint inside the drum,. Then they caught “gum” [really balls filled with paint] in their mouth and made artwork. The first Blue Man spit color out of his mouth. At the end of the show, they threw toilet paper into the audience. I got tangled up in it. When we left the theater, we met a Blue Man in person from The Blue Man Group (pictured right).